The Urban Luddite, for her marvelous feat that is the dairy-free Ultimate Autumn Quiche! We had a seriously hard time choosing, as every single one had major appeal, but creating a whole new dish out of something that relies so heavily on dairy put this over the top. 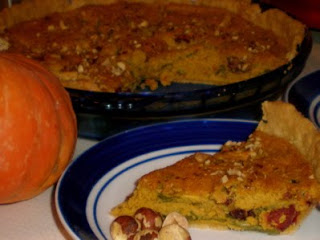 Here’s the recipe, but please do click over and read about Kimberly’s process and creation!

Preheat the oven to 400 F. Leave the pie shell in the freezer for now.

Combine the pumpkin, egg yolks, and applesauce in a large mixing bowl and whisk thoroughly to blend. Add the nutritional yeast – you don’t have to use it if you can’t find it, but it does add a nice cheesy dimension – as well as the maple syrup, mustard, and spices. Whisk again until it’s all evenly blended.

One at a time, stir in the arugula, dried cranberries, and coarsely-chopped nuts. Set aside.

In a separate bowl, beat the egg whites until stiff peaks form. Gently fold into the pumpkin mixture. Retrieve the pie shell from the freezer and carefully pour in the filling; sprinkle the finely-chopped nuts over the top.

Bake at 400 F for 10 minutes, then turn the oven down to 350 F and continue baking another 25-30 minutes, or until a knife inserted into the center comes out clean. Let cool for at least 15 minutes before serving.

Your holiday bakeware will be in the mail as of the next business day. Congratulations to Kimberly, and thanks again to Alisa from Alisa Cooks for co-sponsoring this!