A beverage that’s both refreshing and still very much flavored by fall. 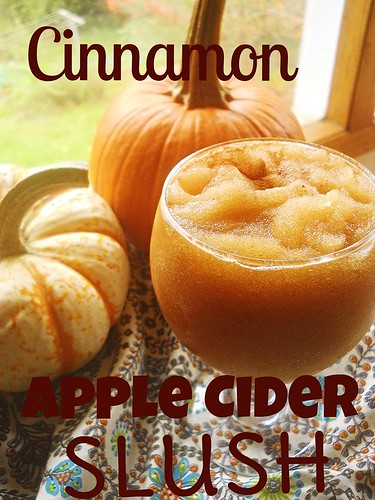 Fresh apple cider is always an autumn treat to look forward to, but I thought I’d try jazzing it up in a very simple way. This may be the perfect beverage for a Thanksgiving table – still full of classic fall flavor, but a cool, refreshing counterbalance to the hot, hearty and often rich holiday fare.

Getting to test drive a Nutri-Ninja Duo blender thanks to the team who hooked us up at IFBC this year was a total bonus. And yes, I will totally vouch for its design, ease of use and efficiency. This recipe uses 14 ice cubes, and it was rendered into delicious slush in seconds flat, thanks to the blade that spirals up the center of the pitcher.  And for extremely easy cleaning, that blade lifts right out – no having to scrape tediously around it at the bottom. But no matter what blender you have, this might be your next autumnal addiction. …

END_OF_DOCUMENT_TOKEN_TO_BE_REPLACED

An Apple Butter (a sort of apple jam that has no added pectin) recipe is a natch for fall . . . but I was skeptical about whether it could be made sugar free.Â  That was the challenge for Daring Cooks this month, with the host John from Eat4Fun.Â  The recipe uses apple cider and a little other sweetener of choice. I was so excited to see that they featured a sugar-free recipe, because my husband was diagnosed with type 2 diabetes recently. Turns out, those Daring Cooks were right. I am thrilled to announce that this recipe is every bit as good as sugary apple butters! One amazing Daring Cook took this challenge to the max and made FIFTEEN different jams and chutneys. Incredible!

And, what the heck, I decided to take it one more step further and try and use it in a recipe.

My first thought was sticky buns, which are a ton of work. But, what about the same sticky idea baked into a biscuit?! These are delicious – sort of a faux cinnamon roll. My family raved about these and ate every little crumb that came out of the oven. They are almost as easy as a batch of biscuits – I just rolled out the dough and spread apple butter, nuts and raisins on the dough and cut them into pieces just like you would cinnamon rolls. Then, I baked them in muffin tins and – Voila! – almost effortless fall dessert!