Perfect popcorn treats for Halloween parties or any other autumn occasion – using no refined sugar. 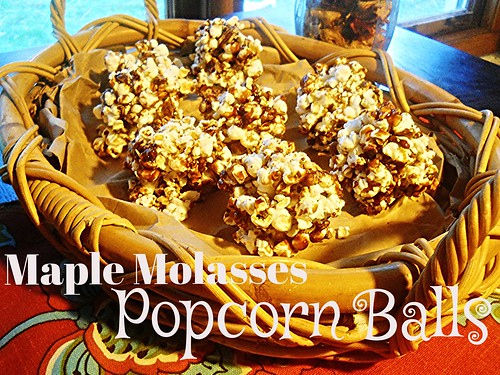 What’s a better homespun Halloween treat than popcorn balls? Being a big fan of Wholesome Sweeteners’ line of non-refined, organic options, I experimented with their hearty blackstrap molasses and their lovely golden honey. Both worked fabulously for a twist on the classic sweet and salty treat, made without any refined sugar. Just a tablespoon of the rich molasses was enough to add just the right robustness to the maple syrup – a little goes a very long way! And the honey with the cinnamon and pecans, well, you may want to make a little extra just to nosh on.

Make it a fun project with the kids! Enjoy.

Start with the pecans, as you’ll want to give them plenty of time to cool down. Preheat oven to 350. Toss pecans together with honey, cinnamon and salt until nuts are evenly coated. Spread over a parchment-lined baking sheet and bake for 20 minutes. Let cool for at least 10 minutes, then transfer to a smooth cutting surface and  chop the heck out of them. (Try not to leave them on the parchment for too long, as they’ll start to stick to the paper. Not an unfixable situation, but saves you the additional mildly annoying task of peeling them off.) Set aside.

Now pop your corn, if you’re going DIY! I found this great method from Simply Recipes and plan to make it this way from now on. I used coconut oil and it worked perfectly well.  Salt to desired saltiness, then set the popped corn aside in a very large bowl.

Finally, the maple and molasses. Combine them in a heavy-bottomed saucepan and heat over medium-high to between 240 and 250 on your candy thermometer. Stir frequently at first, and then pretty much continuously once the temperature rises to over 200. Make sure the pan has plenty of room to bubble!

Once it’s reached 240 + change, remove from heat and, while still stirring, slowly pour over the popcorn. Add the chopped pecans and toss everything together,  until nuts and corn and maple-molasses are pretty evenly distributed.

Finally, take a tiny bit of coconut oil and grease your hands up, then press handfuls of the popcorn mixture firmly together into balls. Let cool completely on some wax paper, then serve or store in an airtight container until you need them/can’t control yourself anymore.